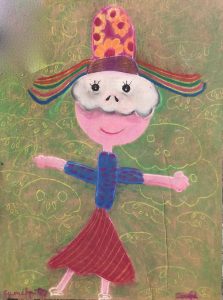 “At the beginning of summer, I had expressed to Allyson my concern about my daughter’s speech. I (and her father) were able to understand her quite well. However, some family and strangers were not. This wasn’t so much an issue for me being judged on her “speech issues,” but an issue for her. Too many
times she would shut down socially. I remember when I [dragged] my big pregnant self to the park on a hot summer day and a little boy showed up. She was so excited and started jabbering up a storm. To which he replied, “Uhh, I don’t even know what you’re saying.” She came right over and asked to go home. Once I finished buckling her up she started sobbing.

She would get so frustrated when family would go on with a conversation with her as though they understood her, but their conversation back wasn’t near what she was talking about. She was tired of repeating herself to them. She was also tired of trying to talk to strangers in line at the grocery store to be met with an empty stare. My heart hurt for her. She had cried many times over this, while I could clearly hear and understand exactly all the pain it was causing. She didn’t qualify for speech [therapy]. I had tried all products for speech…herbal tinctures, specific ratios of omega’s, etc.

I finally had a thought to bring this up to Ally. I was hoping to address the emotional hurt this was causing not expecting there was a remedy for the speech issue itself. My daughter was given Baryta Carbonica. Over the next few weeks her speech cleared up SO much that people carry on lengthy conversations with her [now]. They don’t believe she is just 3 years old. She now loves talking to family and I see her happy in imaginative play with kids at school and the park, chatting back and forth about super powers, white cats, and all of her favorite fruits and vegetables.

I am so thankful every day for the principles of Heilkunst, Ally, Jeff and Diane. My daughter has a lot to say. A lot. And now she isn’t afraid to say it.

-Mom of a daughter who talks until my ears bleed now”