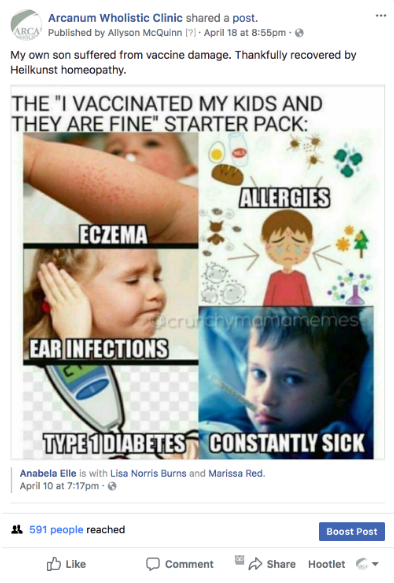 We posted this meme on Arcanum’s Facebook Page a few weeks back and got a number of replies that we thought we should address with a slightly longer post.

One follower of our page wondered, “Do we know why it (vaccines) impacts some children more/differently than others?” This was my answer:

“It’s dynamic. Health of parents (microbiome, minerals, cellular health),  Genetic Miasms (inherited predisposition), exposure to toxins (Ibuprofen, Glyphosate, heavy metals, vaccines, etc.). We find the causes for that individual when we peel off the sequential layers of the traumatic timeline homeopathically. Like a geological dig, you get to see what’s restored to health after each shock and block is released.”

Every Kid Vaccinated Is Damaged To Some Degree

Dr. Andrew Moulden said that every child vaccinated is vaccine damaged. His research showed a wide range of modern neurodevelopmental diseases. He explained how numerous illnesses can actually have multiple triggers. These chronic issues are actually part of a common syndrome that folks are tying together because they mostly don’t know what they’re looking for.

Dr. Moulden spoke a lot to facial anomalies that occur at the moment the child gets the shot given the shock, lack of oxygen and the nature of the chemical toxicity. He cited that Mercury is a highly toxic substance that affects MASS reactions and zeta. Thus, we should be concerned about mercury that is used in dental fillings, mercury in food, and mercury in vaccines. 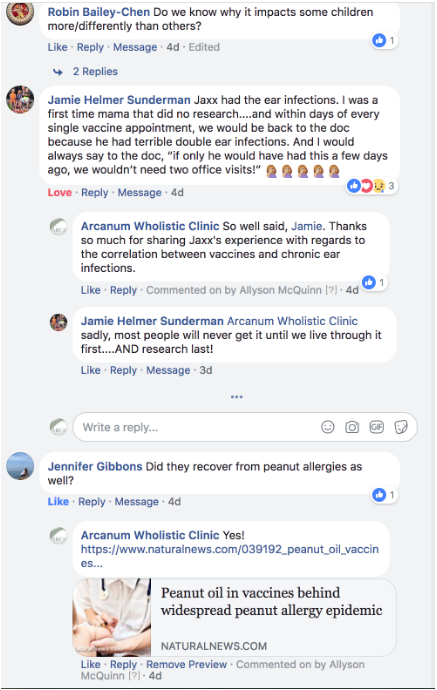 Michelle Goldstein, a mother and researcher cited that her daughter contracted Crohn’s disease after an HPV Vaccine, “It took many years and countless consultations with integrative, holistic physicians before I recognized the link between the HPV vaccination and my daughter’s illness. To be honest, there was only one holistic physician, who specialized in autism, who helped us make this connection. The many others, including a certified functional medicine doctor, failed to connect these two events.

I now believe wholeheartedly that the HPV vaccine and my daughter’s development of a life-threatening autoimmune disorder was no coincidence. Of course, the majority of doctors will claim illnesses and vaccines are not connected in any way. This is part of their education and training as physicians.”

In 1986, Congress officially acknowledged the reality of vaccine-caused injuries and death by creating and passing The National Childhood Vaccine Injury Act (Public Law 99-660). The safety reform portion of this law requires doctors to provide parents with information about the benefits and risks of childhood vaccines prior to vaccination, and to report vaccine reactions to federal health officials.

Doctors are required by law to report suspected cases of vaccine damage. To simplify and centralize this legal requisite, federal health officials established the Vaccine Adverse Event Reporting System (VAERS) — operated by the Centers for Disease Control and Prevention (CDC), and the Food and Drug Administration (FDA).

Ideally, doctors would abide by this federal law and report adverse events following the administration of a vaccine. However, the FDA recently acknowledged that 90 percent of doctors do not report vaccine reactions.

How Many Kids Are We Talking About?

They are choosing to subvert this law by claiming the adverse event was, in their opinion, not related to the vaccine. In fact, every year more than 25,000 reports of adverse reactions to vaccines are filed with the federal government (data initially accessible only through the Freedom of Information Act).

These figures include hospitalizations, irreversible brain damage, and hundreds of deaths. Considering that these numbers may represent just 10 percent, the true figures could be as high as 250,000 adverse events annually. Yes, you read that statistic correctly. However, even this figure could be conservative.

According to Dr. David Kessler, former head of the Food and Drug Administration, “Only about 1 percent of serious events [adverse drug reactions] are reported to the FDA.” Thus, it is entirely possible that millions of people are adversely affected by mandatory vaccines every year.

I was one of those mothers whose family doctor claimed that my son’s screaming around the clock for the first six months of his life was just normal. “Babies cry,” they said. I was so numb with exhaustion and hadn’t had a baby before so didn’t know that sleeping for only 20 – 30 minutes a few times in a 24 hour period wasn’t normal.

I also didn’t know that losing all eye contact and speech after the MMR shot also wasn’t a coincidence. His gut issues, suffering constipation so severe that he only passed stool every 1-2 weeks and had to be put under general anesthetic to remove the impacted stool manually was also chocked up to coincidence as well. He was weak, sickly and failing to thrive. You can listen to Jordan’s story for free here: ww.thepathtocure.com/bonus)

It was only after I had my daughter who was Vaccine Free that I realized that I’d been very seriously duped. Alternatively, she slept several hours in the day and 10-12 hours at night shortly after birth. She also never had the need for Tylenol or Antibiotics until she was eleven and then not again until once in her late teens. Her health has been just that robust.

John Thomas wrote, “Believe it or not, babies used to be easy to manage with the exception perhaps of when they were sick. Blood curdling screams were very rare. Crying for hour after hour with no apparent cause, being listless, failing to grow and mature on schedule were unusual. Today when these kinds of symptoms happen, parents are just told that your son or daughter will grow out of it — you don’t have to worry.”

One of the more surprising realizations when you start to do your due diligence is that the CDC is in the business of pushing vaccines, yet the brain damage vaccines can cause is admitted and disclosed right there before your eyes on the CDC web site. If a doctor, public health official or anybody else tells you vaccines are perfectly safe – they are either misinformed or lying. Tell them to read the CDC web site.

Vicki Batts writes in her article about how parents of vaccine damaged kids are being bullied into silence,

“In 1993, the Marchant family’s 14-month-old daughter received what was supposed to be just a regular MMR vaccine. Before receiving her vaccination, baby Jodie said, “Love you!” to her dad in the waiting room at the doctor’s office. Everything seemed to be going okay — until Mr. Marchant heard his child scream.

As they would later learn, though they thought their child was being given a standard MMR vaccine, this was not the case. In fact, it turned out their child was given an untested 8-in-1 vaccine illegally — a vaccine that would permanently damage their perfectly healthy baby.

After taking their baby girl, Jodie, home from her vaccination appointment, her parents noticed she was shivering, shaking, screaming and running a fever. Like any parent would, the Marchants consulted with a doctor immediately. The doctor insisted Jodie was just suffering from a virus and there was nothing to worry about. Sadly, this would instead become the day Jodie was left permanently disabled, never again to be her normal self.

Jodie began suffering from seizures, incontinence of both bowels and bladder, and acid reflux. She also lost the ability to speak, stopped walking and no longer made eye contact. Jodie suffered with near-constant pain and was inconsolable. And with growing numbers of vaccine-damaged children being reported (and then swept under the rug), doctors merely diagnosed Jodie with autism.

In 1998, however, Jodie was being treated at Royal Free Hospital and doctors finally began to realize that Jodie was not like other children. Pediatric gastroenterologist Professor John Walker-Smith agreed to help the Marchant family and soon uncovered the truth: Jodie was not given an ordinary MMR vaccine. Later that year, Dr. Paul Shattock analyzed a urine sample from Jodie and told her parents that there must have been something else mixed into her vaccine.

After much searching and going through many hoops, the Marchants eventually discovered that their daughter’s doctor had given her not just the MMR vaccine, but also a vaccine for DTaP, polio, and one other vaccine (not currently disclosed). All of this was given to 14-month-old baby in one shot.”

Mike Adams of Natural News writes, “The vaccine industry refuses to conduct scientific tests on the health outcomes of vaccinated children vs. unvaccinated children. Why? Because these test would no doubt show unvaccinated children to be healthier, smarter and far better off than vaccinated children in terms of behavioral disorders, allergies and even autoimmune disorders. Check the people you know: Don’t you routinely find that the most heavily-vaccinated kids are the ones who get sick all the time? Meanwhile, groups like the Amish who largely refuse to vaccinate their children have near-zero rates of autism.”

Vaccines given to children in America today are admitted by the CDC to contain aluminum, mercury, monosodium glutamate and formaldehyde — all known neurotoxins. While healthy people with the right genetic makeup might eliminate these toxins relatively quickly, there is a subgroup of genetically susceptible children and adults who cannot. These individuals are genetically “hyper-susceptible” to vaccine damage. In effect, they are “genetic ticking time bombs” of vaccine damage.

My own son’s vaccine damage was reversed. In a nutshell, this is how we did it:

Also here is a list of some of the other vaccine damaged kids we’ve been able to help:

Here’s what to do to protect your child, naturally, with greater efficacy and without causing them harm: