Some patients tell us they’re afraid to start their Heilkunst journey. I so get this. I was too. However, when I thought more deeply about my mother having died of mental illness at 32 and my father having died of a heart attack at the age of 43, I actually felt more afraid of the diseases coming down my family matrix than if I tried to live with them. My grandmother had been completely numbed out on antidepressants and her flatlined, “Yes dear”, with no emotional sentiment still rang in my ears.

I knew if I weren’t careful, I would end up just like them. I’d lived through such a horrific childho 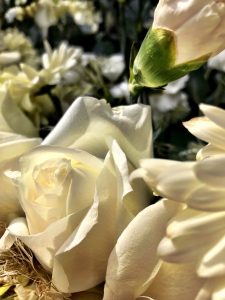 od with my mom’s suicide and my dad’s early demise that I was stretched raw with grief and abandonment issues. I was bringing these unresolved elements into all my my intimate relationships. I pushed them away or they abandoned me. I didn’t know how to do long-term committed relationships as I was always poised for the ‘adios’ shoe to drop.

When I met Jeff, I’d gone through a couple of rounds of Genetic Miasms and I was feeling pretty sore and tender. My son was just recovering from the autism spectrum. I felt like a war-torn PTSD victim. I never realized how much real estate the grief and depression had taken up in me. It was like trying to find the essence of myself out of blowing grains of sand with no glue. I could not discern what was my essential self and what was false ego.

My beloved watched me go into the bereft chute a few times and since he’d studied Bach’s Flower Remedies before Heilkunst, he started prescribing me remedies like Cherry Plum (feels she could lose it at any moment) and White Chestnut (mind going around and around in circles). It felt like this feminine impulse came and rescued me.

My recovery was a thing of beauty. I began to sustain greater and greater states of contentment, then actual happiness seeped in and moments of real bliss and joy were activated in me. I couldn’t believe it – flowers infused in brandy could do all that!

Jeff has continued to prescribe the Flower Essences as adjuncts in his patient’s Heilkunst treatment plans. He scans them in their CoRe trays that helps him discern what combinations of remedies the patient need the most. It’s like taking a peek into the oracle and he’s a master at his craft.

Over the years, I’ve been one of his most difficult patients. Although less verbose than me, when you listen carefully to what he says, you will receive profound nuggets that will change your life. I would not want to do this whole Heilkunst gig without him. Here’s to the art and science of salvation!