I was sent out to work on the family farm in eastern Canada during my summers. I stepped on two rusty nails, punctured my hand with an old saw, and cut myself on the metal hay conveyor belt when my hand got caught in the bailer twine. I was active and busy. Usually you’d spit on the cut (like a dog) and wash it off in the house when you got up there from the fields or the barn. Sometimes, you’d wash it off in the hose just outside the barn door. It never occurred to me, or my parents, to get me a shot of some sort — and we were from the city!

Later, I’d heard of ‘lock jaw’ as it related to tetanus and witnessed my ex-husband get a tetanus shot after my friend’s dog bit him on the nose. So what’s the real deal about this neurotoxin? Why have spores been found in wounds without producing any symptoms? Do you need a tetanus shot or not?

First of all, tetanus is not like other communicable (infectious) childhood diseases or the flu. So-called ‘herd immunity’ doesn’t apply here. Tetanus is actually a bacterium called clostridium tetani that shows up only in 30% of cases of puncture wounds. It’s a bit of a pleomorphic change agent in that the bacterium can be here one minute and gone the next, earning it the title, “ubiquitous.”

Most folks don’t know that the tetanus bacterium can be found in the mouth, in the gastro-intestinal tract, in your home, and even on your clothing. It’s rich in numbers in cultivated soils. It also harmlessly lives in the guts of most animals and rural dwelling humans. Your dog or cat is typically full of these bacteria.

Surprisingly, there are very few incidences of tetanus each year. In fact, the CDC reports an average of 30 cases a year in the USA. Yes, go ahead and read that line again if you need to. Children nationwide are vaccinated, multiple times for tetanus in the DTaP combination, which has occurred for decades in childhood without question, to allegedly prevent this bacterium in 30 annual cases? That’s quite the revenue stream for big pharma!

To be clear, it’s not the bacterium that ultimately precipitates the development of tetanus. The bigger concern are the toxins it produces in those anaerobic conditions (i.e. ‘devoid of oxygen’), “Under normal conditions, no disease will occur if spores are introduced into a wound.”(J. Ark Med Soc Vol 80, No 3 p134) and, “It is the compromised host, or traumatised patient, either by surgery or accident, who is most apt to develop tetanus.” (J Foot Surgery Vol 23, No 3 p235).

This is actually interesting regarding any disease matrix. An acute fear state causes the immune function to gutter as resources answer to the call of fight or flight. The body acts as a hierarchy, which means that while it’s administering an adrenaline spree, releasing endorphins, shutting down secondary and tertiary functioning, and clotting blood like a champ,  clostridium tetani proliferates unchecked.

What should you or the first aider do? Depending on severity, call an ambulance and/or administer first aid. You can use natural soap, clean water, and hydrogen peroxide as they are actually brilliant for cleaning wounds. However, even if you do nothing but dress the wound, there is little threat of contracting tetanus. If you’re unsure if what I’m saying is true, here’s some of the facts from our medical literature that go back a bit.

Sir Leonard Hill circa 1920 cited, “Tetanus and gas gangrene bacilli washed clean and injected are innocuous.” In ‘A System of Bacteriology’ Vol III, page 307, Drs Bosanquet and Eyre say “The bacilli are in pure culture incapable of vegetating in viro,” ie of multiplying in the body. Furthermore, in the Official History of the War, Pathology 1923, it is stated “Tetanus bacilli have been found in 20% of war wounds although no symptoms of tetanus were present, ” and “in 50% of undoubted tetanus cases the bacilli have been undiscoverable.” In the same volume also appears clostridium tetani has been “cultivated from the wound of a man showing no evidence of tetanus, 882 days after it had been inflicted,” and “it has been realised during the war that the tetanus bacillus or its spores may be present in vast numbers of wounds without producing tetanus.” We can easily conclude from the above facts that we have, as the cause of tetanus, a bacterium which is (a) harmless in pure culture (b) incapable of multiplying in the body (c) absent in 50% of cases of undoubted tetanus (d) present in 20% of cases where no tetanus symptoms appeared and often remaining in the body for months or years without producing symptoms.

We can deduce from this that the bacteria itself is pretty feeble, spores remaining dormant for months without producing symptoms, except in 30 cases in a year is pretty innocuous. Wouldn’t you say? So what does cause the bacilli to go on a romp in these few cases? Well, like any disease, it has everything to do with our host. Just as Pasteur recanted on his deathbed, “The microbe is nothing, the terrain is everything.”

What About Other Incidences of Tetanus Outside the USA?

We know that folks suffering existing comorbidities; obesity, diabetes, prior heart condition for example, or simply a deplete microbiome (good bacteria like acidophilus and bifidus in the gut) will create the recipe ripe for hosting any disease matrix. As Dave Mihalovic, a Naturopathic Doctor who specializes in vaccine research, cancer prevention, and a natural approach to treatment cites, “Here we will find the cause of tetanus, not in some microscopic piece of protoplasm which we endow with almost omnipotent properties. Bacterial diseases, so-called, have a biochemical basis. The tetanus bacteria may be a factor in tetanus. The toxin may be involved in some way but that these are fundamental causes is nonsense, otherwise the disease would be more common, in view of the fact that the bacteria is so frequently found on and in our bodies.”

To be clear, most tetanus cases occur in folks suffering poverty, with a lack of clean water, and with deficits in nutrition. They’re most typically from the developing world and mostly from countries nearest to the equator. So wounds from stepping on a rusty nail, or any other deep puncture wound, account for just over half the cases in this specific geography. It’s also in these individuals that dental infections can be found, abortions, tonsilities, unchecked middle ear infections, and appendicitis. In some cases, tetanus shows up in these populations without a wound of any sort occurring at all!  Also lab investigations often will produce negative results.

So what’s the fundamental cause for tetanus and how can it be prevented? Great question. First off, it’s not a simple matter of a germ responsible for causing disease. It’s the co-mingling of dirt and bacteria. It’s a result of a chemical reaction to attempting to shed filth. As we know, the bacteria themselves are harmless when surgically introduced into a clean wound.

Tetanus only develops when dirt is retained in the tissues and drainage of the wound is staunched. The bacilli, themselves, actually do not circulate in the blood. They remain at the gate, the entry point of the lesion, and produce toxins. Basically, it’s a chemical reaction, an elimination process (like many viruses we also know and love).

Medically, if tetanus should be present, safely remove all foreign matter and allow the wound to drain the tetanospasmin and teano-lycin bacilli. The body knows how to do this naturally. Once the wound ceases draining, any vigorous patient will easily recover without excess intervention. Bed rest, plenty of liquids, and food only offered after recovery occurs.

Vaccines Can Not Prevent Tetanus

Vaccines can not prevent Tetanus. Do you want to know why? Think about it – how can you prevent a bacterial fusion that will occur later on between blood and bacterium? The bottom line is that tetanus is not an infectious disease like measles, mumps, or chicken pox. For these infections, immunity is stimulated by a modified form of the disease agent.

Dave Mihalovic states, “The proof of that lies with neonatal tetanus in the developed world, which DISAPPEARED well before the existence of either anti-toxin or a vaccine.” He goes on to say, “If we look at the documented Tetanus Mortality England & Wales from 1901 to 1999, we find that the administration of tetanus vaccine is likely to be pointless and puts children especially at risk of adverse reactions to the vaccines.” 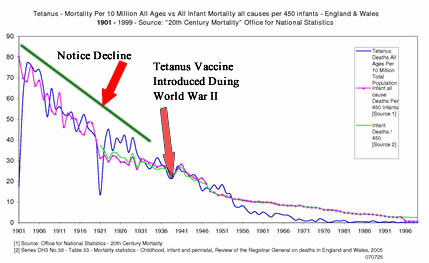 In conclusion, tetanus spores are everywhere. In your backyard, on your clothing, in house dust, on your water bottle, in your mouth, and even your fecal matter. Tetanus has been found to show up post surgery and even innocuous skin testing. If you live with animals like rats, chickens, guinea pigs, dogs, cats, cows, sheep, or horses, the clostridium tetani multiplying in their guts ups your exposure by 25%.

The fundamental point about tetanus disease ONLY being possible in an anaerobic condition, means that it is the DEEP puncture wounds where one would even consider ramping up their first aid and hygiene measures. People running off to the emergency room to get a tetanus shot for EVERY superficial cut or scratch have misunderstood the nature of this disease and its prevention.

If you live (or are visiting) in a 3rd world country, we highly recommend you bring a homeopathic kit that contains Ledum Palustre for any puncture wounds, as it is considered to be the homeopathic prevention of Tetanus. I’ve also added Silicea to this rx to be sure no dirt or debris remains in the wound. I once used Silicea months later after cutting my finger with a broken glass and pushed a shard out that I didn’t know was there!

Dave Mihalovic is a Naturopathic Doctor who specializes in vaccine research, cancer prevention and a natural approach to treatment.