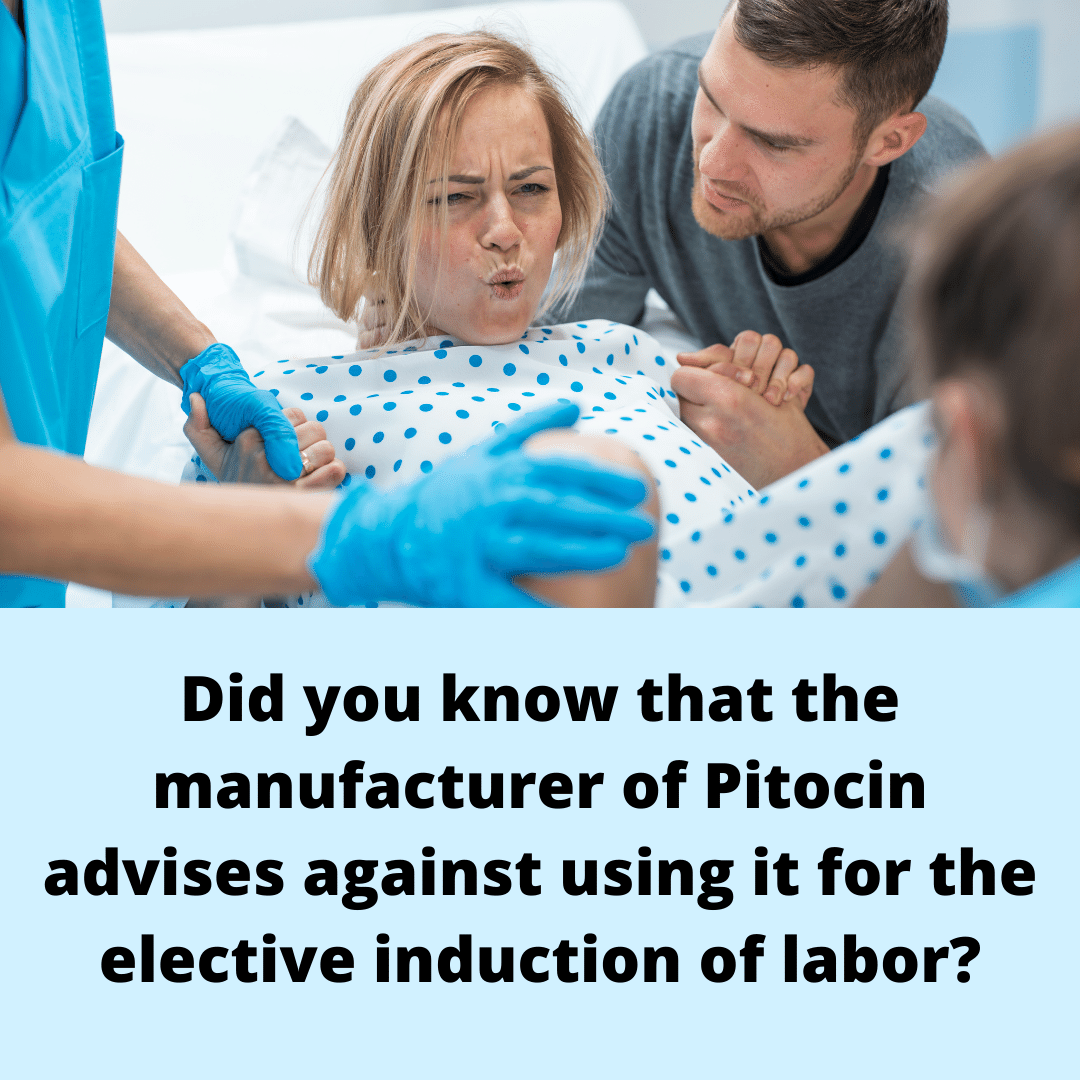 Pitocin is a synthetic form of oxytocin. Doctors recommend Pitocin in 40% of pregnancies for artificially “starting” labor. Yet, the manufacturer of Pitocin advises against using it for the elective induction of labor due to a lack of safety data. Pitocin carries many risks that are rarely talked about. We go over those risks and why physiological, undisturbed childbirth is usually better for both mom and baby.

Pitocin is not safe for the elective induction of labor:

The manufacturer of Pitocin states that it shouldn’t be used for the elective induction of labor due to a lack of data on the possible risks vs. benefits.

The elective induction of labor refers to all non-medical reasons for artificially starting labor, which can be a tricky category in itself.

Some doctors still recommend elective labor induction in perfectly healthy pregnancies at 42, 40, or even 39 weeks, although evidence strongly goes against this practice (Rydahl et al 2019).

In 2013, more than four out of ten mothers in the U.S. said that their care provider tried to induce their labor (Declercq et al., 2013).

It’s a big red flag if your provider doesn’t present you with the potential pros, cons, and alternatives of labor induction with Pitocin. Remember that it’s your right to decline any medical procedure if you wish, including the induction of labor.

Pitocin makes your uterus work harder than it would naturally:

Pitocin is a synthetic form of oxytocin, your body’s main “love hormone.”

Your body releases oxytocin during sex, childbirth, breastfeeding, and bonding with your partner and baby. These are all intimate events and the release of oxytocin in all cases depends on having a safe, nurturing environment (Magon & Kalra, 2011).

Oxytocin is produced in the brain by a deep brain structure known as the hypothalamus. It’s then released into the bloodstream via the pituitary, sometimes called the “master gland” and the main hormonal link between the brain and body.

During birth, oxytocin comes in waves and pulses. It starts off slowly, preparing the uterus, softening, and opening the cervix. Gradually, its waves become more intense, and so do uterine contractions, as your body works hard and in sync to bring your baby earthside.

Natural, physiological contractions are always followed by a pause. They’re also part of the hormonal matrix via which the mother and baby are unconsciously communicating during labor.

How Pitocin is different:

Pitocin is nothing like your body’s own oxytocin. For one, Pitocin is administered directly into your bloodstream in much higher concentrations than your body would produce. The way it’s given differs greatly from the natural waves of your body’s production.

Pitocin often causes extremely painful and long contractions. The pauses in between contractions are short, so little time is left for much-needed physiological rest. As a result, Pitocin exerts your uterus, and it can stress your baby.

The drug label states that Pitocin can cause overstimulation of the uterus even when it is used for the medical induction of labor.

Imagine doing extremely intense training and someone giving you additional muscle stimulation that you have no control over. Something similar happens to the uterus under the influence of Pitocin, but its implications are far more severe.

Pitocin is often the first step in what’s called the “Cascade of Interventions.” This is when one intervention leads to another, each subsequent one often carrying additional risks. A normal physiological event often becomes transformed into a serious medical procedure (Jansen et al., 2013).

Since the contractions caused by Pitocin are so difficult to manage, they frequently lead to women accepting pain relief that they wanted to avoid. The available pain relief options include an epidural, narcotics, and other drugs that can further disrupt the birthing process.

Uterine overstimulation caused by Pitocin is a frequent cause of fetal distress. On a cellular level, fetal distress happens because the baby is lacking oxygen. Uterine contractions that are too long, strong, and frequent reduce blood and oxygen supply (Lipshitz & Klose, 1985).

No wonder Pitocin contractions are harder for babies to tolerate. They squeeze the baby more tightly, for a longer period of time, and with shorter breaks. Babies often don’t have enough time to recover, and they start suffering. Medicine calls this fetal distress. The baby’s heartbeat goes up or down too much, as it frantically tries to fight the drug’s effects and find safety.

Fetal distress often leads to an “emergency” Cesarean section or instrumental delivery (using vacuum or forceps, both of which can leave long-lasting consequences on both mother and baby) (Muraca et al., 2019).

Although fetal distress can sometimes be dangerous, diagnosing it is usually inaccurate. A baby may appear to be under distress but will actually be fine and seem healthy once born. One study concluded that (Ajah et al., 2016):

“The clinical diagnosis of fetal distress is accurate in 29.1% of the cases. However, it has led to an unnecessary cesarean section in the remaining 70.9%.”

That means that the C-section, forceps, episiotomy, and other violent interventions the doctors used to “save the baby and mother” weren’t really needed.

Elective induction by itself makes you more likely to have a C-section:

A 2021 study once again showed that women whose labor was induced were more likely to have a C-section. The authors say:

“Awaiting the natural onset of labor, if there are no maternal or fetal reasons to intervene, may yield no worse a perinatal outcome than an earlier induction of labor. The consequences of a cesarean delivery are known to be associated with immediate and longer-term maternal morbidity, and this may be potentially avoided, if elective inductions of labor can be minimized.” (Levine et al., 2021)

Pitocin disrupts your hormonal matrix and bonding with your baby:

Your natural oxytocin is produced in your brain. It makes you feel bliss and intimacy. It synchronizes with your natural feel-good chemicals, endorphins and enkephalins.  Researchers have confirmed that oxytocin has many positive effects on the mother’s brain during labor and prepares her for a smooth transition into motherhood (Uvnäs-Moberg et al., 2019).

The waves of oxytocin your body is capable of naturally releasing reduce anxiety, stress, and pain in labor. They switch on your pleasure and reward centers. Oxytocin makes you relaxed and happy to meet your baby for the first time—a normal, mammalian reaction (Uvnäs-Moberg et al., 2019).

However, Pitocin doesn’t cross into your brain (it can’t pass the so-called blood-brain barrier). It does not influence your brain and emotions in the same way as oxytocin during physiological labor does.

Pitocin may disrupt your feelings of safety, pleasure, and intimacy during birth. It may disturb bonding with your newborn.

One study found that women given oxytocin don’t experience a rise in endorphins. Women experiencing spontaneous labor went through a gradual increase in endorphins, the levels of which peaked at the baby’s birth. This confirms that Pitocin has major negative effects on the natural hormonal matrix of childbirth (Genazzani et al., 1985).

Added risks of Pitocin for speeding up labor:

Aside from being used to induce labor, Pitocin is also commonly given to augment or artificially speed up labor. This is another way to disrupt physiological birth that doesn’t come without risks.

What we’ve learned from the massive medicalization of birth that started in the last century is a simple truth: birth usually works best when left undisturbed.

Labor usually starts when mom and baby are ready. Our bodies know how to create a complex cocktail of natural hormones that supports safe and ecstatic childbirth.

Pitocin can disrupt that and trigger a cascade of other interventions that make the birth a less satisfactory (and often traumatic) experience. You can always decline Pitocin if you want to have a completely natural childbirth.

Was your labor induced or augmented with Pitocin? What was your experience like? Please share in the comments.

An expanded version of this article was also published on Herbal Doula’s website. Read it here. 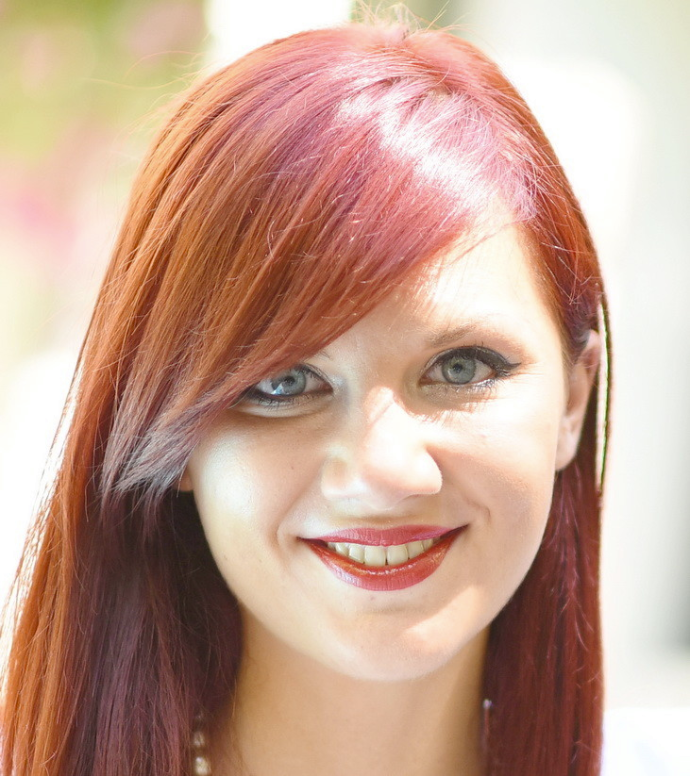 2 thoughts on “The Dangers of Pitocin for Elective Labor Induction”