As the saying goes, “If it sounds too good to be true, then it probably is!”. We live in an age of instant gratification and convenience, and with so many things, choosing health often takes a little bit of elbow grease, or *gasp* inconvenience. In absolute terms, though, the price that we pay for so many of our conveniences, when assessed objectively, is actually not really worth it, and so we realize that it is really an illusion we are letting go, and not a true convenience. 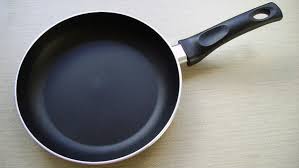 Non-stick, Teflon®-coated cookware belongs to this category of apparent conveniences which actually are a burden to our health. I’ve written about the toxic nature of fluoridated products, including many municipality’s public drinking water, as well as most commercial toothpaste. Perflurooctanoic Acid (PFOA, or simply “C8”) is the compound used to make Teflon® pans, and is linked with numerous cancers and other health risks. Workers at the Dupont factory who are exposed to this, for example, show much higher rates of kidney cancers and other kidney diseases. In general, the kidney is one of the organs where this chemical tends to accumulate.

A Teflon® pan becomes toxic particularly if it has been overheated, or if there is a scratch in it. Given the high toxicity of PFOA, it is not at all worth the risk, in my mind, of keeping any Teflon® products in your kitchen.

If you really think about it, a big part of how Teflon® became so popular, was based on the myth of low-fat diets being healthier for us, and a need to cook without oil in pans that wouldn’t stick. Once you understand the truth about our need for oils to be healthy, and learn how to cook with them on safe cookware (including stainless steel, cast iron, or titanium-ceramic pans), the “convenience” of non-stick cookware very quickly will appear to you as the illusion it actually is.

If the issues of water fluoridation are new to you, I thought it would be valuable to provide some good resources to get an understanding of what are the issues and history around fluoride.

Christopher Bryson’s book The Fluoride Deception is a thoroughly researched and well received book. It is available both in traditional book format, as well as in the Kindle e-book format. In case you don’t know, you don’t need a Kindle device to read a Kindle book, but a regular computer, smart phone, or iPad will do the trick.

If you’re not the type to want to commit to reading a whole book, you can catch the author in this Youtube series:

And finally, for those of you who would like to explore a variety of resources on the topic, the best site on the web is The Fluoride Action Network, which has articles, videos, as well as point-form lists outlining the key issues.

The practice of forced medication in municipalities who add fluoride to their town water supply is highly questionable. Here are some of the questions which come to mind when I think about it:

These questions are just a small sample, but the key point here is to begin to really examine the so-called logic of the practice of water fluoridation.

Have you had to bring any of these issues up with your city council, and what sort of response did you receive? 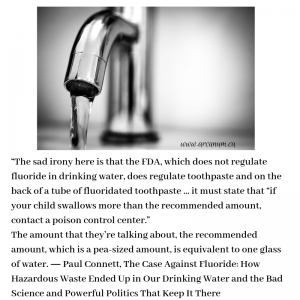 The issue of forcing populations of people to consume unmeasured amounts of a toxic drug is, of course, abhorrent to our modern sensibilities. The most shocking thing, however, is that this is still happening in many municipalities across Canada and the U.S. today. I’m speaking of the addition of Hydrofluorosilic Acid (aka ‘fluoride’) to the municipal drinking water supply in many part of Canada and the U.S., as well as some parts of Europe. Even if such fluoride treatments offered the benefits that are claimed (which have been thoroughly disproven, by the way), there are many medical and legal reasons why it is a very poor idea to dose an entire population with a drug without the informed consent of each and every recipient.

Throughout this blog series, bear in mind that I’ll often interchange the terms “fluoride” with “hydrofluorosilic acid”, which are not exactly the same thing. The latter term is the industrial toxic by-product of the aluminum industry, which is what is added to the water supply in many municipalities. The former term is the natural form, which we actually receive from a natural diet, and is a healthy part of our bones. Part of how the issue of fluoride has been obscured is by the intentional confusion between these two terms, and taking the safety of the natural element fluoride, and insinuating that its industrial counter-part is equally safe, which it is not. I’ll often use the term “fluoride” throughout, but you’ll be able to tell by the context when I’m referring to “hydrofluorosilic acid”, the toxic form.

I will write about the range of these issues in a series of blog posts, and today I’ll start with one aspect of examining the toxicity of these fluoride treatments, as illustrated by the “proving” symptoms of fluoric acid in the homeopathic materia medica. A proving, as you may know, is the methodology by which a substance is ingested by a group of healthy individuals in order to meticulously observe and record its composite symptom picture, which can then be used to correctly identify when that given medicine can be prescribed curatively on the basis of the law of similars. An unintentional use of such proving data is that we can use it to illustrate the toxic effects of a given substance as used in the homeopathic materia medica, such as Mercurius, or Cannabis Indica. Such proving data illustrates both the state of mind, as well as the toxic physical symptoms of a disease which can be caused by a toxic substance.

Some of the key proving symptoms of fluoric acid are:

So, this is certainly not a toxin that we would want to take on an individual basis, let alone to give to a whole population. In the following blog posts, I’ll continue to explore the various medical and legal issues of this bizarre practice of mass medication.

Do you know if there’s fluoride added in your municipality, and if so, how have you addressed it personally, as well as politically?