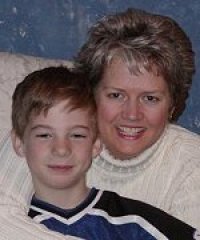 My son, Jordan, was born seven weeks prematurely. After my water broke at thirty-two weeks, I held onto him for another week as his watery home leaked down my legs. From the numerous ultrasounds, we could see that he was generating a pocket of amniotic fluid around his mouth and he was effectively breathing it in and out of his lungs. His heartbeat and movements were closely monitored twenty-four hours a day. As I lay in bed listening for his little voice to tell me what was to come next, I tapped out his heartbeat on the hard-covered books I was reading. I was waiting for the rhythm of our one parallel life to divide into two.

The Doctors, after telling me that my baby would weigh around four and a half pounds at birth, administered steroid shots into my hip to encourage his lung development. Their main concerns were his size and ability to breathe effectively on his own. The Pediatrician, specializing in premature births, said that the chances were excellent that my baby would be a “fully operational model” and the last four weeks in utero were solely about weight gain and putting the finishing touches on lung development. I turned over on the rubber mattress, listened to my baby’s heartbeat and waited.

On the fourth day in hospital, my husband wheeled me down to the special care nursery so that we could meet a baby that was of similar weight and development to ours. This is a foreign world known by only a few. The nursing staff walked around calmly, monitoring alarms that blared when a baby forgot to breathe. I was shocked beyond belief to see a baby that was just over one pound. He looked more like an organism from another planet than someone’s child. He was hooked up to enough monitoring equipment that I’m sure the wires alone weighed ten times what he did.

I saw healthy quadruplets lying in open incubators all in a row, waiting to go home the next day. I saw a ten-pound infant which I thought looked like an oversized baby piglet; big, round and very pink. He was being treated for having swallowed too much muconium on his way out into the world.

This was the sequestered ward for little ones with birth defects, and my baby was going to be numbered among them. I spotted a small sleeping baby in an enclosed incubator at the far side of the room. Hooked up to a variety of equipment, she weighed four pounds six ounces and had been born the day before. I’ll never forget the sensation creep up my spine as I realized that there was nothing normal about giving birth to such a tiny form.

The life principle did not appear to be fully animated in these petite beings. It was if they had been plucked too soon, their one natural energetic chord of life support severed and replaced by a multitude of plastic tubes and metal wires. These babies appeared exposed, vulnerable and clearly out of their domain. I could see in the eyes of their mothers an acknowledgment of their present reality, a gaping chasm that separated them from their expectations of childbirth.

Jordan emerged into the world three days later by Cesarean section after his heart rate went up to 200 beats per minute. His Apgar scores weren’t on any chart as he was ripped from my body. He was small, blue and not breathing. He was rushed like a little football to another room. The rhythm of the pounding heartbeat finally broken, I began to wait for news. As I was being sewn up, someone mentioned that he was a boy. My Jordan was now on his own, defining his own terms.

More information about The Path To Cure.